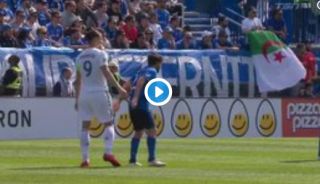 Former Manchester United striker Zlatan Ibrahimovic received a red card for slapping an opponent around the head in action for LA Galaxy tonight.

The Swede can have no complaints about this decision as he reacted badly to a Montreal player stepping on his foot – an incident that didn’t look deliberate.

Judge for yourselves with the video below, but it surely has to go down as a moment of madness for Ibrahimovic…

The 36-year-old only recently joined LA Galaxy from Manchester United, and has three goals in seven appearances for the MLS giants.