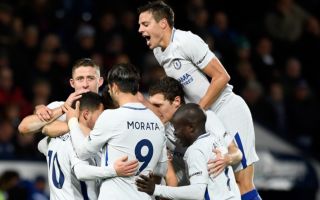 It hasn’t been a great season for Alvaro Morata as it culminated in the Chelsea striker missing out on making the Spain squad for the World Cup this summer.

With just 15 goals in 48 appearances for the Blues, he couldn’t maintain his impressive start to the campaign as the goals dried up and he wasn’t able to have an influential role in Antonio Conte’s side.

Chelsea ended up outside of the top four in the Premier League, and although they lifted the FA Cup last weekend to end the season on a high note, there are undoubtedly still issues at Stamford Bridge as they managed to score just 62 league goals which was the lowest tally of the top six sides.

Whether or not Morata will still be part of that plan remains to be seen, as Calciomercato, via Sky Sport Italia, report that AC Milan have expressed an interest in the 25-year-old but Chelsea want at least €60m if they are to sell him after just one season.

It’s claimed that an intermediary, Beppe Bozzo, spoke with Milan officials on Tuesday, and that in turn has led to the reports that the Rossoneri could press ahead with a move for the Spaniard in the coming months.

Milan are certainly in need of more firepower themselves as summer signings Andre Silva and Nikola Kalinic failed to have the desired impact this past season, scoring just 16 goals in all competitions between them.

That left it to youngster Patrick Cutrone to end the campaign as the club’s top goalscorer, but evidently more is needed as they’ll return to the Europa League next year.

Given Morata’s poor goalscoring form this season in mind, as mentioned above, it’s questionable as to whether he’s the most sensible transfer target to bring in to solve such a problem.

Nevertheless, he did enjoy a successful stint at Juventus previously, and so perhaps a return to Italy where his game is well suited to Serie A, could be the catalyst for him to rediscover his best form and put a disappointing year in London behind him.

It would be a shame if he did leave England so soon though, as having now had a year to settle in the capital, he may well just need more time to adjust and improve his game to be effective.