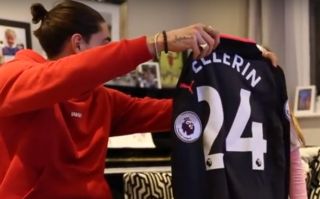 The news across the Arsenal sphere might be dominated by the shocking news of the imminent arrival of former Paris Saint-Germain Unai Emery, however, some new squad numbers have been confirmed by the club – indicating some players could be staying at the club beyond this summer.

Goalkeeper Petr Cech has now been assigned the No. 1 jersey, after wearing the No. 33 since his arrival in 2015.

Cech attributed to selecting the No. 33 because of his age when he signed for the north London club at the time.

The change in number could mean that he remains at the Emirates next year, despite making some errors in certain games for the Gunners last season.

However, the biggest change is Hector Bellerin changing from the No. 24 to the No. 2 previously worn by former right-back Mathieu Debuchy.

This could hint that Bellerin is staying as it is unlikely that the club would risk the fans’ wrath by giving him a new number and selling shirts with the fresh details if they planned to cash in on reported interest from Juventus, as per The Express.

Granit Xhaka moves from No. 29 to his favoured No. 34, which holds importance to him as it was his first as a professional footballer, and is even tattooed on his back and his arm, according to The Mirror.

Here’s why the number has special meaning for Granit… pic.twitter.com/I4MNF4Yc0o

The Swiss wore it at previous club Borussia Mönchengladbach and takes the number that was vacated by Francis Coquelin.

Meanwhile, Mohamed Elneny has been upgraded to the No.4 which could be seen as an indication that he is set for a major role in Arsenal’s midfield next season.

Elneny put in a number of good performances in the Gunners’ Europa League campaign and takes the number previously worn by the retiring Per Mertesacker.

Oh and by the way – Arsenal have changed a few squad numbers: