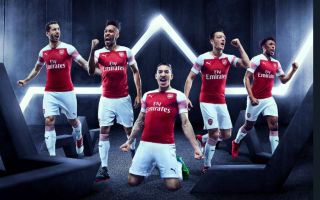 Eager-eyed Arsenal fans have spotted an embarrassing mistake made by one their key players during a team photoshoot.

The Bosnian defender has become the joke of Arsenal twitter this evening after the individual shots of Arsenal players from their recent group photoshoot emerged.

The 24-year-old can be seen proudly wearing the brand new Arsenal strip that was unveiled this week completely oblivious to the mistake he had made.

Why did nobody tell Kolasinac he had his shorts on backwards during his photoshoot ? pic.twitter.com/emoVblfccU

Perhaps it was an intentional mistake from the Bosnian to offer some light entertainment to Arsenal fans after a tough season. We however suspect that the Arsenal star simply just struggled with the simple process of correctly dressing himself. (It really doesn’t bode well for the left-back heading into Arsenal’s first season without Arsene Wenger in over two decades).

Kolasinac made 27 appearances for the Gunners this season and even managed to register two goals in his debut season. The Bosnian however did see his playing opportunities significantly decrease during the backend of the campaign.

When Arsenal reverted back to a traditional back four the Bosnian often struggled to gain Wenger’s confidence that he could play as a traditional full-back rather than as a wing-back in a 3-4-3.