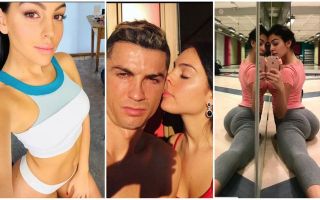 Cristiano Ronaldo is days away from Real Madrid’s biggest game of the season, and he’s opted to spend his time this week with his girlfriend Georgina Rodriguez and his children.

The 33-year-old is one win away from an incredible fifth Champions League trophy, with Los Blancos hoping to create history by making it three consecutive European triumphs on Saturday when they take on Liverpool in Kiev in the Champions League final.

In turn, they’ll be desperate to see the Portuguese international in top form and fully fit after his recent injury setback, and it looks as though he’s taking it easy this week as he shared the post below on social media spending his morning with his family.

A little further down you’ll find his stunning better half Rodriguez looking incredible as she looks after the kids, and given he’s going to be a busy man this summer at the World Cup in Russia, the pair are probably trying to make the most of their time together this week.

There’ll be no time for rest for Ronaldo as he’ll soon head off to join his international teammates with the tournament kicking off in just over three weeks. But first, he’ll be hoping to celebrate another European triumph and it’ll be no surprise if Rodriguez is in attendance to cheer her man on.