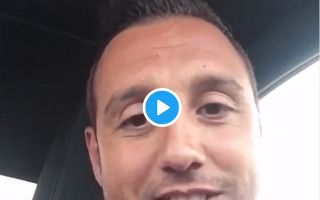 After joining Arsenal in 2012, midfield ace Santi Cazorla has said goodbye to the club and the supporters as he prepares to move on this summer.

The 33-year-old made 180 appearances for the Gunners, winning two FA Cups during his time in north London, but injuries have blighted his career over the past two years.

Cazorla hasn’t made a single Premier League appearance since October 2016 due to ongoing problems with an Achilles tendon injury, and with his contract set to expire this summer, he has confirmed that he will be leaving the Emirates in the coming weeks, as seen in the video below.

It remains to be seen what his next challenge will be, but ultimately he’ll leave a popular figure with the Arsenal supporters having established himself as a crucial part of Arsene Wenger’s side.

His ability to link play between defence and attack was pivotal to the way in which Arsenal played and it could be argued that they’ve been missing something ever since his injury troubles began.

Nevertheless, as he cut an emotional figure in his farewell video below, he took time to thank the supporters for backing him throughout and he’ll undoubtedly leave with some positive memories too despite his injury woes.

It could be a summer of real change for Arsenal across the board as with Wenger stepping down, the new man in the top job could look to make significant changes to the squad to stamp his mark on the group. As per BBC Sport, it may well be Unai Emery who takes the job, but evidently, it’s not set to result in his compatriot Cazorla remaining.