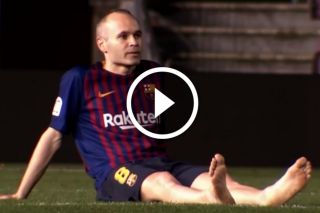 Of all the memorable images and videos seen on Sunday as Andres Iniesta bid farewell to Barcelona, there was one in particular that went viral.

After a stellar stint with the Catalan giants running over two decades since he initially joined the youth academy, the 34-year-old has undoubtedly written his name into club folklore.

As seen in the image below, he was seen enjoying a moment to himself on the Nou Camp pitch after the win over Real Sociedad at the weekend, as he proceeded to take a selfie and enjoy his final night as a Barcelona player.

Iniesta and his theatre ?#UCL pic.twitter.com/xftMjZFDGq

Now, the full video has been released and it’s an emotional watch.

Iniesta, so important to Barca over the years as he’s established himself as a club legend having made 674 appearances while winning nine La Liga titles, four Champions League trophies and countless other trophies and individual accolades, was clearly soaking up the occasion as much as he could.

After spending a minute or so sat in the middle of the pitch, he bid a final goodbye to what has been his home for so long and now it remains to be seen what his next move is.

Meanwhile, Barcelona coach Ernesto Valverde now has the difficult task of finding a way to replace the veteran’s influence on the team, as he showed again this season that he was far from finished.