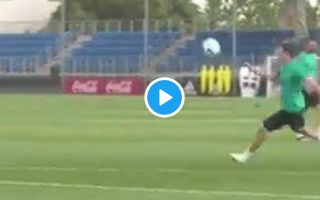 Real Madrid are preparing for the Champions League final in Kiev on Saturday night, and Zinedine Zidane is doing his part to get them going in training!

The French tactician has enjoyed a trophy laden spell as coach since taking charge at the Bernabeu, but he’s evidently still got it as he produced this perfect assist for Mateo Kovacic.

The Madrid midfielder then proceeded to blast home his effort into the back of the net, and unsurprisingly, it got plenty of love on social media especially with Zidane’s contribution in mind.

It’s unlikely to be enough to push Kovacic into plans for the starting line-up against Liverpool, but he’ll be itching to play a part in helping Los Blancos seal another Champions League triumph.

Given they’re going for their third consecutive trophy, no one should put it past them doing it. However, Zidane will be watching from the sidelines this weekend hoping that experience and quality comes through on their part to see off Jurgen Klopp’s men.

OK Kova aside for a bit,Zizou’s lay off though ? reminds me of ’06 WC 1/4 final v Brazil toying with Ronaldihno and Ze Roberto

Is that Zizou chest trapping the ball???