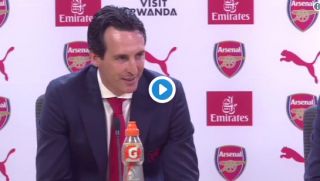 Unai Emery wowed reporters at his press conference today as he spoke to the UK press for the first time as Arsenal manager.

The Spanish tactician has been chosen as the replacement for Arsene Wenger, who stepped down at the end of the season after 22 years as Gunners boss.

Emery has big shoes to fill, but impressed with his English despite not having worked in the country before and with many expecting him to speak through an interpreter.

Emery sounded strong, confident and optimistic about the challenges at Arsenal and it’s certainly gone down well with fans on Twitter today…

Kudos to Unai Emery ! Takes some real balls to give a full interview in English when he only knows some basic English ! ??

Pretty ballsy from Emery doing his first interview in English considering his English isn't great. Like what I've heard in the press conference, now to take it to the pitch!! The only way is up #WelcomeUnai ???

"My English is not the very best now"

Emery’s English is decent. I expect him to communicate well and get his ideas across