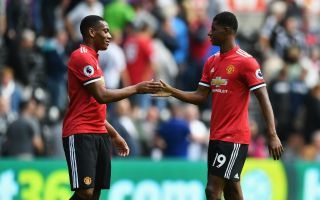 Chelsea have reportedly been dealt a major blow in their transfer pursuit of Manchester United forward Anthony Martial this summer.

The France international may not have been a regular part of Jose Mourinho’s first-team in recent times, but it seems a deal for the Blues to snap him up will not be straightforward.

This is because, while United are willing to consider selling Martial this summer, they do not want to risk losing the promising youngster to a Premier League rival, according to the Daily Mail.

This seems a wise strategy from United, with manager Jose Mourinho knowing all about the potential damage that can do after failing to show faith in the likes of Kevin De Bruyne and Mohamed Salah when he had them at Chelsea.

Both are now among the best players in the world in their positions and have played starring roles this season for Manchester City and Liverpool, respectively.

Martial seems another who could go down that route and the Mail report of interest from both Chelsea and Tottenham in the 22-year-old.

However, they also state Juventus and Napoli could be in the running and a move abroad looks more likely for the man rated by United at around £70million, according to a recent report from the Sun.