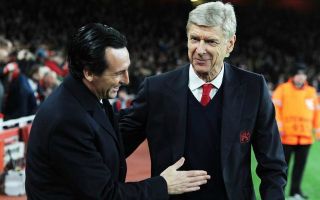 Unai Emery has made his first appearance as Arsenal head coach and paid tribute to former Arsenal manager Arsene Wenger.

The north London side officially confirmed the appointment of former Paris Saint-Germain and Sevilla boss Emery as their new head coach this morning.

The Spanish tactician replaces Arsene Wenger, who stepped down at the end of the season to bring to an end to 22 years in charge of the Gunners.

Wenger won 10 major trophies as the Gunners’ manager and helped to revolutionise English football with his training and dietary methods as well as playing a brand of expansive and entertaining football.

And Emery spoke glowingly about the legacy Wenger left at Arsenal and said he has learnt a great deal from Wenger about the game.

Emery said, as reported by the Evening Standard: “Thank you Arsene Wenger for your legacy for all the coaches in all the world. It’s reverence. I learn with him all the things in football.”

Furthermore, as reported by BBC Sport Emery added: “This is a big project and I am proud to be here and to work after Arsene Wenger.”

Emery: “Thank you Arsene Wenger for your legacy for all the coaches in all the world. It’s reverence. I learn with him all the things in football.”

Arsenal chief executive Ivan Gazidis spoke in detail about the process of selecting a new manager and said Emery fitted the criteria set out by the Arsenal hierarchy.

As per the report by the BBC Sport, Arsenal chief executive Ivan Gazidis said:

“I’m excited and delighted to announce the new head coach of the football club, Unai Emery. I would like to give you some background into the process. After the announcement that Arsene would be moving on, we formed a three-man panel. We had some clear criteria we were looking for in our section.

“The first was entertaining football, the second was a personality to fit Arsenal Football Club, and thirdly was a record for developing players. We looked through and analysed on the basis that every coach in the world would be interested in this position. We don’t believe there is a more attractive position in world football.”

Given Arsenal fans’ attachment to Wenger – even among those who have wanted him out for some time – it’s clear Emery played it well by name-dropping his predecessor early as he looks to make a good first impression to the supporters.