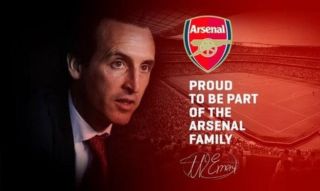 The Unai Emery Arsenal move may already have looked nailed on after a decisive report from BBC Sport on Monday, but the manager himself now appears to have confirmed it.

The former Paris Saint-Germain and Sevilla boss briefly had a picture on his personal website of him and the Arsenal badge, with the caption: ‘Proud to be part of the Arsenal family’, though it was quickly removed.

This was picked up by a number of sites and blogs including fan site Daily Cannon, with Emery’s announcement as the new Gunners boss surely not too far away now.

The 46-year-old will replace Arsene Wenger at the Emirates Stadium after the Frenchman recently stepped down after 22 years in charge of the north London giants.

Despite so many great memories under Wenger, it looked time for a change and Emery has impressed in stints in charge of Sevilla and PSG, even if the Arsenal job is arguably his biggest challenge yet.

Fans will likely just be glad to see a change after so much stagnation, and may also be relieved not to see the club go for rumoured target Mikel Arteta, whom Sky Sports suggested had pulled out of the role anyway.

BREAKING: Sky sources understand Mikel Arteta has withdrawn from the running to be the next @Arsenal manager, leaving Unai Emery the new number one choice. #SSN pic.twitter.com/hXtcrNF7yC

Still, having only ever served as assistant to Manchester City manager Pep Guardiola rather than managing a side himself, Arteta did not look nearly experienced enough for a job of this size.