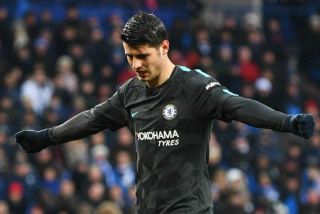 Alvaro Morata had a difficult first season at Chelsea, and reports claim that he may not get a second season to prove his worth to the Blues.

The Spaniard managed just 15 goals in 48 appearances after his summer move from Real Madrid, failing to extend an impressive start at Stamford Bridge to go through his fair share of struggles in scoring regularly while competition arrived in the form of Olivier Giroud in January.

His woes were arguably a significant factor in Chelsea’s inability to score goals consistently as a team too, as they ended the year with just 62 goals in 38 league games, the lowest tally of the top six sides in the standings.

As reported by Calciomercato, via radio channel Cadena Ser, it’s now been claimed that Chelsea could use him as a makeweight in a bid to sign Inter striker Mauro Icardi. The report claims that the offer will consist of €35m-€40m plus Morata for the Argentine forward.

In contrast to Morata, Icardi has been prolific for the Nerazzurri, scoring 107 goals in 182 games since joining them in 2013.

On top of that, he leads from the front as club captain, and has shown that he can offer more than just goals too with his overall influential play on the pitch and growing influence in Luciano Spalletti’s side.

Spalletti will certainly hope to avoid losing his talismanic captain, particularly given that he’s just played an instrumental role in getting them back into the Champions League following their dramatic last-day win over Lazio.

However, it remains to be seen if the report is accurate and in turn what the response would be from the Inter hierarchy as they’d be getting a financial boost and a direct replacement if they agree to sell their top goalscorer.