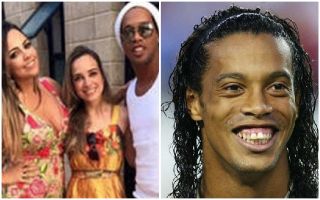 After spending years entertaining us all on the pitch, it appears as though former Barcelona, AC Milan and Brazil superstar Ronaldinho has got his hands full off the pitch these days too.

Enjoying his retirement after a glittering career in Europe and in his homeland along with a memorable international run with the Selecao, he will be remembered as one of the greats of all time.

However, he’s clearly got his hands too full to have any time to be thinking about that as reports in Brazil have claimed that he will marry TWO women in August, with ‘fiancees’ Priscilla Coelho and Beatriz Souza both falling for the 38-year-old.

As per the Mirror, it’s even claimed that the trio have been living together since December and the two ladies are given £1,500 a month each as an ‘allowance’ along with identical presents.

We’re not quite sure how it’s going to work at the ceremony as to whether the two brides will walk each other down the aisle or not, but this is undoubtedly the most bonkers story of the week.

Nevertheless, who are we to judge. Ronaldinho has seemingly found love twice over and the two women in his life are happy with their arrangement. Good luck to them!

Former Barcelona and PSG is star said to treat Priscilla Coelho and Beatriz Souza the same – including buying them matching gifts. pic.twitter.com/gVGItGUgm6