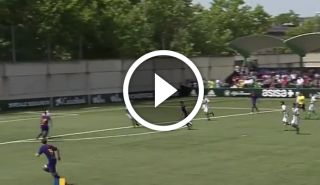 Barcelona have developed some of the best talent in Europe through their La Masia youth academy, and it looks like the conveyor belt will continue to churn out stars.

It’s a prominent time to talk about the next crop of youngsters coming through the ranks, as club icon Andres Iniesta left the Catalan giants this week after a glittering career at the Nou Camp.

Others such as Sergio Busquets, Gerard Pique and Sergi Roberto will continue to fly the flag for the time being, but the hierarchy will be hoping that they can continue to produce homegrown talent to avoid having to splash out in the market to address weaknesses.

Based on the evidence of the video below, it looks like they could be in safe hands as some of the youngsters busy scoring goals look like they’ve got an unbelievable amount of raw talent already and they’re at the best place to get even better if they make the grade.

Ranging from the Under-9s to the Under-19s, there could be some names to look out for in the coming years as Barcelona showed off what they’ve got coming up in the future.