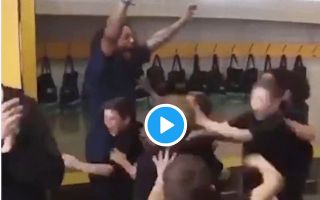 After his son became a viral hit with his headers challenge with the Real Madrid stars earlier this month, Marcelo has attempted to steal his shine!

The Brazilian ace will be busy preparing for the Champions League final this weekend as well as the World Cup in Russia this summer.

However, he took some time out of his schedule to attempt this challenge with his son’s football team, and it’s fair to say it didn’t quite go to plan.

Marcelo had to switch to keepy-uppies at one stage as the group lost their momentum, but to his credit and that of the youngsters, they kept it alive and it ended up with the Madrid star heading the ball into the laundry basket, just as his son did.

With the video of both included in the tweet below, who did it best? We have to give the edge to Enzo on this one!