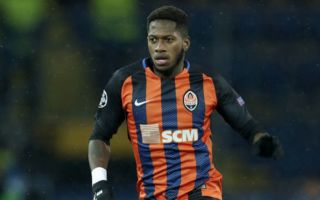 Manchester Utd are closing in on the signing of Brazil star Fred, according to a report from Sky Sports.

The Shakhtar midfielder has starred in the Champions League and in Ukraine and The Sun claim he is valued at around £52 million.

A move to Manchester would represent an incredible rise for the 25-year-old, who has seven caps for Brazil.

So what do we know of him and what is his background and style of play? We have all the details below.

Who is Fred and what is his playing style?

He has a cultured left foot but is known for his playmaking ability with both feet and operates in either opposition box.

According to Sky, Fred said in an interview with football.ua that he sees himself as the ‘conductor’ under current manager Paulo Fonseca.

The Brazilian is responsible for dictating the tempo and setting the transitions between defence and attack and uses his dribbling skills to great effect.

According to the report from The Sun, Fred averaged 3.3 take-ons per 90 minutes in the Champions League this season, at a success rate of 95 per cent.

He also performed well against Premier League champions Manchester City in Europe this season when the Ukrainian side defeated City 2-1.

Jose Mourinho could certainly do with this type of signing this summer due to the retirement of Michael Carrick – who Utd have arguably failed to replace as natural midfield playmaker.

That fact that Marouane Fellaini is coming towards the end of his contract also shows the need for another body too.