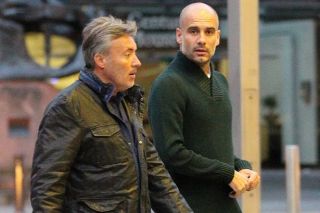 Mikel Arteta has been snapped on an evening out with Manchester City manager Pep Guardiola just after being overlooked for the Arsenal manager’s job.

The Gunners ultimately chose Unai Emery to replace Arsene Wenger at the Emirates Stadium, though Arteta had an impressive interview with the club and was in contention, according to the Independent.

The Spaniard has been part of Guardiola’s coaching team at Man City for the last two seasons, ever since retiring from playing with Arsenal.

While the 36-year-old looked a somewhat surprise choice for the north London giants, it did take some by surprise when Emery was suddenly the favourite after little prior speculation involving the former Paris Saint-Germain and Sevilla boss.

Trying to find a pub in Manchester so asked these lads for directions ! ??? pic.twitter.com/x2rivcaFGQ

Arteta may well be gutted to miss out on his first chance at management, but he seemed in decent spirits as a fan asked him and Guardiola for pub recommendations in Manchester.

Having just won the Premier League title with City, celebrations should be in order, though Arteta may also have been looking to unwind after the stress of ultimately failing to persuade Arsenal to hire him.