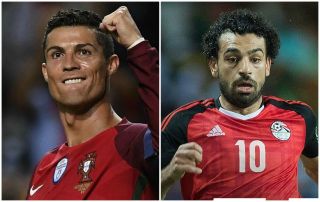 The stage is set tomorrow with Real Madrid and Liverpool going head-to-head in the Champions League final at the NSC Olimpiyskiy Stadium in Kiev, Ukraine.

Two of Europe’s giants will face each other in what promises to be an eventful affair, however, the game will also have the intriguing subplot with two of the world’s stars showcasing their remarkable talents.

Real Madrid and Liverpool will look to their talismans Cristiano Ronaldo and Mohamed Salah to provide that bit of genius to help them win Europe’s most coveted prize.

They have had remarkable seasons for their clubs and in the Champions League – but how do their statistics compare?

Between them, they have scored an incredible 88 goals and are both on 44 goals each with Lionel Messi the only player to score more this season (45).

Ronaldo has scored 15 times in the Champions League, including the incredible overhead kick against Juventus, whilst Salah has scored 11 times in Europe – including in qualifiers.

Ronaldo currently holds the record for being the Champions League top scorer in the 2013/2014 season when he scored 17 times and unsurprisingly, he is next on the list with 16 goals in the 2015/2016 season.

According to Sky Sports, the Portugal captain is vying to become the first player to win five Champions League finals, ahead of Andres Iniesta and Clarence Seedorf.

“He plays with the left, I play with the right, I’m tall, he’s a little bit shorter…”

Cristiano Ronaldo doesn’t see any comparisons between him and Mohamed Salah ?#NoFilterUCL: The Final, Episode 1, drops at 9am on Friday morning ? pic.twitter.com/WrdH4fSver

Interestingly, as per the report from Sky, this will be the first major club final Salah will partake in, whereas Ronaldo has played in 16 club finals and won 12.

Salah’s 44 goals in all competitions is brilliant for someone playing in their first full season in the Premier League and he could break Ruud van Nistelrooy’s tally of 44 goals.

The Egyptian star also needs three goals to match Ian Rush’s record of 47 goals for the Reds in a single season.

Both come into the game in good nick too with Ronaldo scoring against Villarreal on the last day of the La Liga season and Salah netting against Brighton in the Premier League to seal European football for the Reds next season.

Below are some stats of both, as per the Press Association, reported by the Evening Standard.