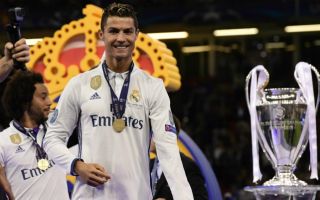 Although the Portugal international didn’t manage a goal against the Reds this evening, with his side winning 3-1 he picked up his fifth European Cup win of his career.

That makes Ronaldo the only player to have won the competition so many times, with tonight’s victory Madrid’s fourth in the last five years.

The 33-year-old also won the trophy with Manchester United back in 2007/08, and this latest record only further cements his place as one of the greatest players of all time, not that that was in any doubt anyway.

Cristiano Ronaldo is now the only player in history to win 5 Champions League titles:

Still, it could elevate him above Barcelona star and nemesis Lionel Messi, with the debate over who out of those two is the best of their generation going on for many years now.

There can be no questioning Ronaldo keeps delivering the goods on the biggest stage and he’s played a key role in Madrid’s win again tonight, the 13th Champions League win of their history.