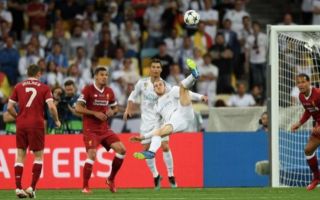 The Spanish giants opened the scoring through Karim Benzema, with Sadio Mane then equalising just a few minutes later.

MORE: Video: Loris Karius flushes his Liverpool career down the toilet with second howler of the Champions League final

Bale scored the goal of the tournament 20 minutes from full time, with the former Spurs star bagging his second a few minutes later to wrap up the Champions League for Los Blancos.

We’ve picked out the Good, the Bad and the Insane from tonight’s encapsulating final in Ukraine.

Gareth Bale. My word. What a performance from the Welshman. Despite starting the match on the bench, the former Spurs star definitely left his mark on the match with his two superb goals.

His first goal was one that’ll be talked about in decades to come, with his second wrapping up a 13th Champions League title for Zinedine Zidane’s side.

Bale has struggled to get game time this season, however following his performance tonight, it seems like he may be getting a few more minutes for Los Blancos next campaign… if he’s still there.

People can talk about the keeper but that Bale goal deserved to win the any final. World class and was the difference on the night ???

We need to have a word about Loris Karius. The Liverpool shot-stopper had one of the worst games from any goalkeeper in the Champions League in recent memory this evening as he gifted Los Blancos the title.

He basically gifted Real Madrid their opening goal after he rolled the ball straight to Benzema, something that certainly didn’t do the Reds any favours.

His mistake for the third goal was absolute shocking as well, with the German almost throwing the ball into his own goal after Gareth Bale had a strike from a long way out.

If one things for certain, Karius is definitely not going to be the most loved man in Liverpool once he and his teammates return from Kiev.

Loris Karius with an absolutely disgraceful error. He should be sacked on the spot. #RMCF #LFC #UCLFinal

Gareth Bale’s second goal was, to put it simply absolutely insane, and is one that’ll be talked about by fans and critics alike for years and years to come.

The sheer audacity to try something like that in a Champions League final is something that no one expected, with some even saying it was better than Cristiano Ronaldo’s strike against Juventus earlier in the competition.

Just broke my jaw as it dropped to the floor at the Bale goal. Truly world class.