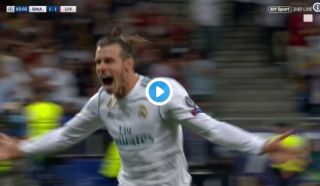 Real Madrid star Gareth Bale has scored an incredible overhead kick to give his side a 2-1 lead over Liverpool in the Champions League final.

The Wales international had only been on the pitch for a few minutes after being introduced from the bench, in what looks an inspired move by manager Zinedine Zidane.

MORE: Video: Liverpool go 1-0 down to perhaps the worst goalkeeping error ever in the Champions League final

Collecting a cross from Marcelo on the left, Bale drifted into the middle and showed remarkable reflexes to adjust his body, get up in the air and make such a sweet connection with the ball.

Liverpool have it all to do now after losing Mohamed Salah to injury earlier in the match, but at least they can tell themselves it won’t be that calamitous Karim Benzema goal that decides this one.

If it proves to be the winner, this Bale strike is sure to go down as a classic in Champions League history.

This is the best goal EVER in a final.