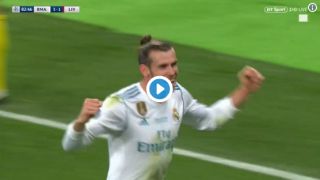 Liverpool goalkeeper Loris Karius has had an absolute nightmare for the Reds in tonight’s Champions League final.

First, the German bizarrely threw the ball against Karim Benzema to hand Real Madrid a 1-0 lead, and now he’s absolutely guaranteed this final will be remembered for his disasterclass.

Gareth Bale has scored his second of the night, and while his first was an absolute screamer of an overhead kick, this was all down to Karius.

The Welshman unleashed a powerful effort from long range, but Karius should not have let this past him as he feebly parried it into the back of the net.

This surely hands Real Madrid the win as they go 3-1 up in Kiev and head for a third Champions League final victory in a row.

As for Karius, one imagines this more or less ends his Anfield career – how does a player come back from something like this?

A night to remember for the Welshman, a night to forget for Loris Karius.#UCLfinal pic.twitter.com/wz7xFuRJSk