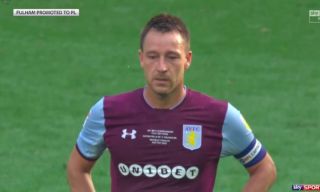 There are few things in football that can unite fans as much as seeing John Terry sad.

Remember, this is the man who stepped up to take the winning penalty in the 2008 Champions League final – and missed; this is the man who arranged to be subbed off in the 26th minute and have everyone do a lap of honour for him in his final game for Chelsea.

Most recently, the Guardian are among sources who reported the former England captain wanted a clause to avoid playing his old side Chelsea in the Premier League were Aston Villa to win promotion this season.

Luckily for him, he need not worry about suffering such a heart-wrenching ordeal as Fulham beat Terry’s Villa side 1-0 in today’s Championship play-off final at Wembley.

Predictably, everyone is now making the precise same joke about it as the trolls pile on to the 37-year-old over his outlandish and overly sentimental request…

I guess John Terry need not worry about facing Chelsea

At least John Terry doesn’t need to worry about playing against Chelsea any more, eh?

John Terry must be thrilled he won't have to play against Chelsea now.

Ah well, at least JT doesn't need to worry about playing against Chelsea next season.

At least silly bollocks John terry won't have to worry about playing against Chelsea next season ??? … Enjoy the championship next season Mr Chelsea …. Well done Fulham see you next season ? pic.twitter.com/XC7yOx5aWT

Wonder if John Terry still wants that contract where we cannot play against Chelsea ???fucking idiot ???

Fulham are back in the #EPL. Atleast Chelsea won't be facing John Terry next season! #CFC

Guess John Terry doesn’t have to worry about off days against Chelsea. #PlayOffFinal

Bet John Terry fixed the game so he wouldn't have to face Chelsea Hahahahaha ?