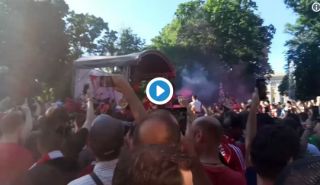 An incredible atmosphere is building in Kiev tonight ahead of the Champions League final clash between Liverpool and Real Madrid.

It’s fair to say the Reds supporters are truly relishing this occasion, with their supporters in fine voice ahead of what they hope will be a sixth European Cup win.

Liverpool will also hope this kind of passion from their fans can spur their team on in the way it clearly did in rocking games at Anfield against Manchester City and Roma in previous rounds.

On both occasions, the atmosphere looked too much for the visitors, and it could be important psychologically tonight as many Real Madrid fans will quite likely, and perhaps rightly, see their side as the big favourites anyway after being so used to winning this competition.

Madrid have won the last two in a row, and three in the last four seasons, but with support like this behind them, Liverpool can’t be ruled out in causing an upset this evening.

Oh, and of course it’s rocking back in Liverpool as well for those who couldn’t make it to the final tonight…