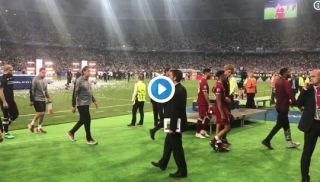 The Reds ace was at fault for two goals against Real Madrid, who won 3-1 in Kiev to lift the European Cup for the third year in a row.

MORE: Video: Steven Gerrard’s priceless reaction to being made to watch Gareth Bale’s goal vs Liverpool again and again

Things couldn’t really have gone any worse for Karius, who suffered two moments of madness in what will likely be the biggest game he plays in his career.

It’s easy to turn on players at times like this and forget that they’re people, but this video below from Sporf captured former Liverpool star Carragher taking a moment to comfort him.

? Jamie @Carra23 goes over to console @LorisKarius after the final-whistle.

? Once a leader, always a leader.

Love him or hate him, the ex-Red is known for his passion for his old side and will have been hurting at the result, so it is truly heartwarming to see him think of Karius as well just after that bad defeat.