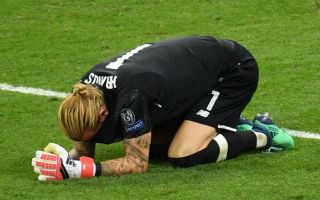 Liverpool manager Jurgen Klopp has discussed the performance of Loris Karius after the Champions League final defeat to Real Madrid.

If you haven’t seen the goals tonight, it really is worth watching quite how spectacularly Karius messed up on the first and third strikes from Real Madrid as they won the final 3-1 in Kiev.

One has to feel sorry for the German tonight after majorly fluffing his lines in what is likely to be the biggest game he’ll ever play in, as is indeed the case for the team-mates he’ll feel he let down.

Klopp said afterwards that he felt sorry for the player and that the club would support him through what is likely to be a difficult and dark period for him mentally.

Klopp on Karius: "I only had a few words after the game. there is nothing to talk in the moment. I really feel for him, nobody wants that. The mistakes were obvious, we don't have to talk about it. He has to deal with it, we will do that. We will be with him, for sure." #LFC

The Reds boss has the reputation for being a great man-manager and fans will hope he can somehow restore Karius’ confidence after this absolute nightmare on the biggest stage.

Some will also politely suggest the club try to sign a new goalkeeper this summer, but perhaps that’s for another day…