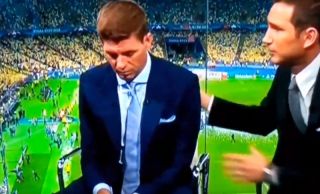 It’s not easy being a Liverpool fan tonight, and Steven Gerrard gave perhaps the best example of that on air for BT Sport.

The former Reds captain was on punditry duty alongside Frank Lampard and Rio Ferdinand as he watched his old side lose 3-1 to Real Madrid in the Champions League final.

Unlike most Liverpool fans, who can go and drown their sorrows tonight, Gerrard was put through the torture of having to re-live the whole thing and keep it together for the television cameras.

A few Manchester United fans noticed it on Twitter and certainly enjoyed watching the former England man struggle to hide his despair, particularly as those around him gushed over that first Gareth Bale goal…

Gerrard is burning, they keep showing him bales goal??

Gerrard still in the studio ??? must of seen the bale goal 54 times now

If they show the bale goal again, I honestly think Gerrard might take the mic off and walk off set ??

Gerrard just wants to get the fuck out of there and they just keep playing the Bale goal over and over ???