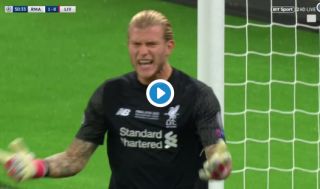 Liverpool went behind in the Champions League final thanks to one of the most calamitous and bizarre errors ever made by a goalkeeper in such a big game.

Having run out of goal to catch a simple ball over the top, there seemed no danger around Loris Karius as he looked to pick out a team-mate.

Incredibly, the German ‘keeper then threw the ball against Karim Benzema’s foot, only for it to trickle in and make it 1-0 to Real Madrid.