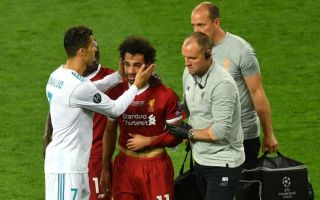 Real Madrid star Cristiano Ronaldo has been hailed a ‘class act’ by fans on Twitter as pictures showed him comforting Mohamed Salah as he went off for Liverpool.

The Egypt international had to be subbed off early in tonight’s Champions League final in Kiev after a heavy challenge from Madrid captain Sergio Ramos.

MORE: ‘A disgrace to the game’ – Real Madrid star slammed for challenge that forced Mohamed Salah off for Liverpool

Ronaldo knows all too well how painful it can be having to go off in such a big game, having suffered the same fate due to an injury as Portugal won the final of Euro 2016.

The Portugal international was unsurprisingly on hand to comfort Salah as he left the pitch in tears in what is no doubt a big disappointment for Liverpool fans and neutrals tonight.

One of the best players in Europe this season, it would have been interesting to see what Salah could do once he’d got into full flow tonight, but Liverpool now face the tough task of winning without their 44-goal superstar.

#Cristiano Ronaldo consoling Mohamed Salah after his injury. Touch of class from the Portuguese

Cristiano Ronaldo has also been forced out of an European final due to injury in the past #UCLfinal #ChampionsLeagueFinal pic.twitter.com/7rpUZ554Or

Cristiano Ronaldo knows what it's like to be forced off in a major final ?

Class act. Ronaldo does know how Salah feels to suffer in final match where he can no longer help his team on the pitch. https://t.co/XBgT012NZj

A touch of class from Cristiano Ronaldo.

He knows what it's like to be forced off in a big final. pic.twitter.com/NRH3vcHj58