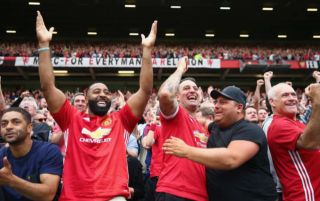 Man United fans took to Twitter this evening to lap up the fact that fierce rivals Liverpool lost to Real Madrid in the final of the Champions League this evening.

The Reds suffered 3-1 defeat to Los Blancos in Ukraine, with former Spurs star Gareth Bale bagging two great goals to help get the Spanish giants over the line.

Following the match, a whole of fans, including a lot of Man United ones, took to social media to laud in the fact that Liverpool didn’t manage to secure their sixth Champions League trophy tonight.

Despite not winning a trophy of their own this season, United fans still found time to gloat in the fact that Liverpool lost tonight, a match every single Reds fan would’ve been dying to see their side win.

I hate Liverpool and I’m so happy they lost today. But I do have to say they’ve been quality this season. Unfortunately in big games they can’t play their best and today was the same. Bale scored a stunner and Liverpool couldn’t react and the rest is history

I am so HAPPY Liverpool lost the Champions League Final ?. They are a vile club. Congratulations to Cristiano Ronaldo and Real Madrid. Thank you for making my season not feel so bad ????. #UCLFINAL

Bale and Karius are Man United legends because they stopped Liverpool winning the #UCLFinal ???

So Liverpool finished with the same amount of trophies as “finished” Man United ????

I'm so happy Liverpool lost. I'm not a big Madrid fan. But Liverpool winning is the stuff of nightmares. What a wild game. What a wild goal. What a crazy swing of events.

As a United fan I’m happy that Liverpool lost. As a human being, I’m gutted for Karius. That is his legacy now, this is going to hang over him for the rest of his life