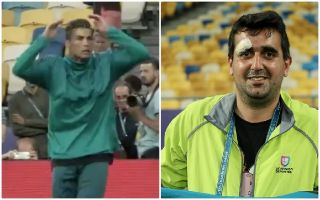 Cristiano Ronaldo had a moment of panic in the final Real Madrid training session on Friday, but don’t worry Madrid fans, it was nothing injury related.

The Portuguese superstar is expected to start for Los Blancos when they take on Liverpool in the Champions League final in Kiev on Saturday night.

SEE MORE: ‘Why is Messi even in this?’ – Fans left baffled as BT Sport name Champions League team of tournament, LFC fans fume

However, he may want to discover his shooting boots in time for the game, as evidently he was lacking his usual accuracy on Friday evening in the squad’s last training session before the big showdown.

As seen in the video below, Ronaldo sent a fierce shot straying away from the goal and it ended up hitting a journalist and causing him a bit of damage on the evidence of the image included below.

In turn, the 33-year-old tried to make up for it as while he looked genuinely embarrassed and remorseful as he saw where his attempted shot was heading, he sent a member of the coaching staff to give his training top to the journalist in a bid to apologise.

It looked as though things were smoothed over between the pair, but with that plaster over his eye, it looks like the journo in question could be leaving Kiev this weekend with two unexpected souvenirs.

Hit by a @cristiano shot… But the four-time #UCLfinal winner makes up for it!

During training on Friday, a Cristiano Ronaldo shot hit this journalist in the head.

The Real Madrid star apologized by giving him his jacket. pic.twitter.com/qwt7iN9S7A