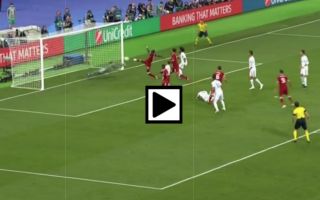 Liverpool had Sadio Mane to thank tonight, as the Senegal ace bagged a simple equaliser to draw the Reds level against Los Blancos in the Champions League final this evening.

The Merseyside club had gone 1-0 down thanks to a calamitous error from goalkeeper Loris Karius, who gave Karim Benzema an open goal to tap the ball into after he rolled the ball straight to him.

MORE: Video: Liverpool go 1-0 down to perhaps the worst goalkeeping error ever in the Champions League final

However, Liverpool only took a few minutes to claw themselves back into the match, as a header from Dejan Lovren was turned home by Mane at the far post to draw the match all square.

Following this goal, Reds fans will surly be hoping their side can push on from this and find a way to secure their first Champions League since 2005.

Here’s a clip of Mane’s equaliser tonight, a true striker’s finish from the former Southampton man.

Liverpool are level thanks to Sadio Mane's 11th Champions League goal of the season! ? pic.twitter.com/WxGRPHHWlO