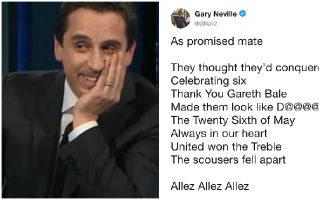 It was a night to forget for Liverpool on Saturday, but they were seemingly rejoicing in the red half of Manchester as they watched their rivals fall short in the Champions League final.

The Reds suffered a 3-1 defeat to Real Madrid in Kiev, with goalkeeper Loris Karius dominating headlines after his two costly blunders on the biggest of stages.

SEE MORE: ‘It was disgusting’ – Liverpool players blasted for what they did after Karius horror show

Naturally, there would have been sympathy for the German shot-stopper as he was clearly heartbroken after the full-time whistle, but former Manchester United defender Gary Neville had no such feeling for his old club’s bitter rivals in general, as evidenced in the tweet below.

To be fair, the Liverpool fans have been immense in Europe this season, as they always are. But so much was made of their travelling supporters and their renditions of the very catchy ‘Allez, Allez, Allez’ chant that it almost overshadowed the fact that they had it all to do against the European powerhouse that is Madrid.

That was proven on the pitch, albeit with a massive helping hand from Karius, and so Neville took his opportunity to rub it in and have a huge dig at Liverpool with his own version of their famous song…