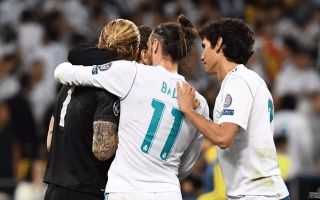 Liverpool goalkeeper Loris Karius experienced the worst night of his career thus far on Saturday after his costly blunders against Real Madrid in the Champions League final.

After gifting the defending champions the opener as he went to throw the ball out only for Karim Benzema to divert it into the back of the net in a bizarre incident, Karius then allowed a tame long-range effort from Gareth Bale to slip through his hands to give Madrid a 3-1 lead.

There was no comeback from the Reds this time around as the German shot-stopper looked a very relieved man when Sadio Mane had initially equalised before Bale stepped up with a sensational overhead kick to restore Madrid’s lead as Liverpool then saw their goalkeeper commit another poor mistake.

Naturally, he was in tears after the full-time whistle, crying uncontrollably as it dawned on him that he had effectively cost Liverpool their shot at European glory in Kiev.

To his credit, he went over to the Liverpool end of the stadium and held his hands up to apologise to the thousands of travelling supporters, but as noted in the tweets below, many onlookers were far from impressed with the fact that not a single Liverpool player was in sight to help their grief-stricken teammate immediately after the full-time whistle had sounded.

It really is surprising in truth as although they were all undoubtedly disappointed with what had transpired and perhaps showed their support in the dressing room, it was a poor move that not a single teammate was out there with Karius on the pitch to help him in a crushing moment.

The German ace will now have to display real character to bounce back from this, but it looks like his teammates are receiving a lot of stick to take some of the spotlight away from him…

It was disgusting the way the Liverpool players just left him on the pitch. First person to console was a Madrid player. Yes he cost them 2 goals but he’s been amazing whole season, he #walkedAlone when it was supposed go be #YoullNeverWalkAlone#karius #liveroolfans #forgiven pic.twitter.com/Ohf8bEj4Sn

A Liverpool player should have gone to Karius. Still none yet. Not one.

Liverpool’s most famous chant is ‘You’ll Never Walk Alone’ but at FT it was Karius who was walking alone apologising to the fans.

The Liverpool players were no where to be seen, was consoled by Madrid players & Liverpool staff. pic.twitter.com/vi3S0QgNQX

Unless you’re Karius. Not one Liverpool player went over to him after the match. pic.twitter.com/uA5isPeBs3

Karius sobbing uncontrollably & apologising to Liverpool supporters and not a single Liverpool player goes to him to offer support.

Don’t give me that You’ll never walk alone bollocks again.

The entire Liverpool squad left Karius alone in the end. None of his teammates came over and put their arm around him and tried to console him. Not even Klopp. Vile club. #YNWA my ass.

I remember when Lahm came over to Schweinsteiger when he missed than pen v Chelsea.

Not a single Liverpool team-mate consoled Karius after the final whistle? Seems like only Real Madrid players did. So much for ‘you’ll never walk alone’ LOL

Liverpool said you will never walk alone, but no single Liverpool player went ahead to console Karius Loris after the match, they let him walk alone.. that hurt!!

The fact that not a single Liverpool player consoled Karius after the final whistle is incredibly damaging to the club’s reputation. You want to sing “You’ll Never Walk Alone” every game? Then embrace that moral and act like your song tells you too.

Karius has to be picked up by Real Madrid players. No Liverpool team-mates in sight.