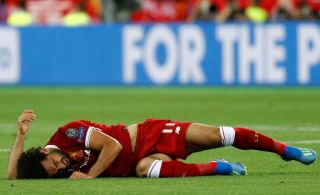 After what has been a simply sensational season for Liverpool ace Mohamed Salah, it ended in the cruelest possible way on Saturday night in Kiev.

As the Reds slipped to a 3-1 defeat to Real Madrid in the Champions League final, the Egyptian international was forced off in tears in the first half after injuring his shoulder.

SEE MORE: ‘It was disgusting’ – Liverpool players blasted for what they did after Karius horror show

Despite trying to battle on through the pain, it was too much for him as he collapsed to the ground moments after the initial challenge before walking off the pitch in tears as he also now fears the worst for his participation at the World Cup this summer.

“He is in the hospital for an X-ray. It’s either the collarbone or the shoulder itself. It doesn’t look good, that’s it.”

That followed on from this video surfacing of the 25-year-old leaving the stadium in Kiev with his arm in a sling, as it really was heartbreaking to see his dream of influencing a Champions League final taken away from him as his absence thereafter undoubtedly had a negative impact on Liverpool.

Salah ends the campaign with 44 goals and 16 assists in 52 games, but unfortunately for him and the Merseyside giants, they also end the year empty-handed.

In turn, the focus will now be on his ability to recover in time for the World Cup, as it really would be a devastating way to see such an incredible season end and for neutrals, the majority will surely be hoping to see one of the best players in Europe perform on the biggest stage in Russia this summer.

Sadly, it doesn’t sound promising. BBC Sport suggest that he may well have suffered a dislocated shoulder and so despite the positive nature of the Egyptian FA’s tweet, that would put his participation in Russia in real doubt.

That claim is doubled down on by The Independent, but the wait is now on for an official statement from either Liverpool or the Egyptian FA to confirm Salah’s status.

What makes the World Cup so special is to see the best players on show and delivering their best. Not seeing one of the top players in Europe this season feature would be a really disappointing setback and a bitter blow for Salah himself.