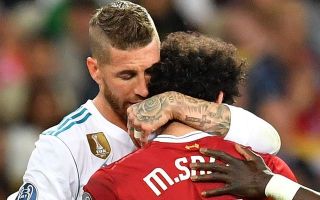 Liverpool winger Mohamed Salah saw his Champions League final dream shattered in Kiev on Saturday night after he was forced off with an injury in the first half against Real Madrid.

The Egyptian went down under a challenge from Madrid captain Sergio Ramos as his arm appeared to get stuck under his weight and subsequently was jarred out of its natural position.

After initially looking as though he would be able to recover and continue playing, Salah was down in a heap on the ground again moments later and as he started to cry uncontrollably, it was evident that he couldn’t continue.

It was a massive blow for Liverpool and Jurgen Klopp in their bid to win the game which they went on lose 3-1, but Salah will undoubtedly be the most heartbroken of all as he was unable to feature from the 30-minute mark onwards and with the World Cup just weeks away, he may now be a major doubt for that too.

Ramos received plenty of criticism from Liverpool fans on social media after the incident involving the pair, but to his credit, he has shown his class by sending a message to Salah on Twitter, as seen below.

It’s difficult to believe that he would have gone out to intentionally injure another professional, regardless of whether or not fans want to see it that way given it was Salah who has been fundamental to Liverpool’s progression this season.

In turn, coupled with this message wishing Salah a speedy recovery, he has done all he can do and so it remains to be seen if the Liverpool ace accepts and focuses on his rehabilitation work for the World Cup in the next fortnight as neutrals and particularly Egyptians will be desperate to see him in Russia.

“Football teaches you the sweetest face at times and the bitterest of others. First of all we are peers. Swift recovery, Salah. The future awaits you. Sometimes football shows you it’s good side and other times the bad. Above all, we are fellow pros. Get well soon.”