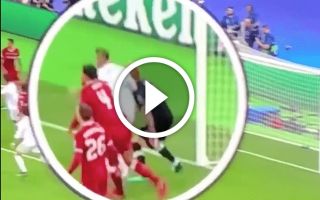 It was a night of contrasting emotions for Real Madrid captain Sergio Ramos and Liverpool goalkeeper Loris Karius as the former saw his side lift the Champions League trophy.

Two blunders from the Reds shot-stopper helped them on their way, as after firstly gifting an opener to Karim Benzema, Karius couldn’t keep out a tame Gareth Bale effort which slipped through his hands.

Understandably, he was distraught after the full-time whistle, while Ramos led the way for his side as they celebrated an incredible third consecutive Champions League triumph, and fourth in the last five years.

However, as seen in the video below taken from German TV coverage of the game, the Spanish international was not only a talking point and subject of intense criticism for the foul on Mohamed Salah which forced him off with a shoulder injury in the first half, but he’s been slammed for this incident involving Karius too.

On first glance, it looks as though he’s got away with another contentious decision here as he seems to strike Karius in the face.

Nevertheless, he does receive a shove from Virgil van Dijk, and so perhaps his momentum takes him into the goalkeeper and off the pitch.

Karius was not impressed as he protested to the referee and officials but ultimately they fell on deaf ears. Whether the heavy blow to his face had any effect on his performance thereafter is questionable, but it still doesn’t look particularly great if you’re Ramos. Not that it will mean much to him now as he celebrates winning another major piece of silverware…

Anyone noticed THAT?! 49 th Minute: #Ramos hit #Karius against his head! ? #UCLfinal pic.twitter.com/f0SEgzdMkS

Sergio Ramos is a poor sportsman; there is a chance he intentionally injured Mo!!!!. But what goes around comes around!!!!

Took Salah out tried to take Karius out faked a head injury when Mané was nowhere near him . Everything that is wrong in football #Ramos #cheat

Ramos should be stripped of that medal ..the ma is a brawler not a baller

If @UEFAcom doesn’t take serious action against Ramos, everyone knows they are a joke and in Madrid’s pocket so nothing will be done. So corrupt.

Ramos basically ended the #UCLfinal when he tackled Salah in the 25th minute of the game and forcing him out with injury. He’s the most treacherous rapscallion the beautiful game has ever seen.

Another example of Ramos filthy play . They must look at this he should have had 3 red cards .1 for Salah 1 for Karius 1 for diving twice clutching his face without being touched (learned that one from Ronaldo )

Ramos is just a pure thug. Belongs in a correctional institution.