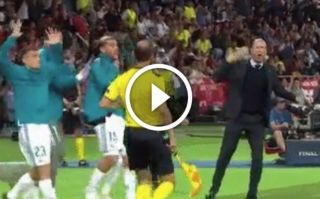 From the ridiculous to the sublime, and back to the ridiculous again. Real Madrid’s win over Liverpool in the Champions League final in Kiev on Saturday night had it all.

Loris Karius will want to forget the season finale as quickly as possible, as his two blunders ultimately cost the Reds dearly in their 3-1 defeat.

Sandwiched in between those two moments of madness though was the goal of the tournament, as Gareth Bale produced this ridiculous overhead kick finish to restore Madrid’s lead.

This is the best goal EVER in a final.

Given the stage on which it was scored and the importance of its timing, it will undoubtedly go down in history as one of the best goals ever scored.

Based on Zinedine Zidane’s reaction to the goal, as seen below, the French tactician knows that this is going to be written into Real Madrid folklore. He knows a thing or two himself about scoring a stunner in the Champions League final after his brilliant volley against Bayer Leverkusen in 2002.

If you get this kind of response from the French legend, you know you’ve just scored a beauty!