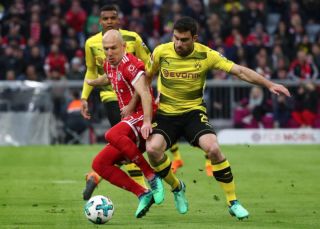 A look at the stats in the Premier League table last season will quickly paint a picture as to where Arsenal’s biggest issues lie ahead of next year.

As reported by Goal.com, a big factor in Unai Emery getting the job to replace Arsene Wenger was that he displayed an impressive knowledge of the Arsenal squad during the interview phase with the hierarchy.

In turn, that would suggest that he has done his homework and will begin the job in a strong position to quickly identify what needs to be improved and which areas of his newly inherited squad have to be strengthened.

Having conceded 51 goals in 38 league games last season, giving them the worst defensive record of the top seven sides in the standings, it would come as no surprise if the Spanish tactician begins his work with a new defender being brought in.

That’s exactly what Arsenal are working on according to Kicker, who report that Borussia Dortmund defensive ace Sokratis Papastathopoulos is the top target for the Gunners, albeit they’re still short of his €18m price-tag having offered €15m.

Whether or not that gap is bridged remains to be seen, but the 29-year-old has certainly accumulated plenty of experience at the top level and displayed defensive solidity to warrant being courted by Arsenal.

Further, with The Telegraph suggesting that Emery may be restricted in the transfer market in terms of funds available, this would seem like a sensible purchase with the Greek defender’s reported price-tag in mind as it will arguably be difficult to find other experienced internationals to improve the squad at such a relatively low cost in today’s market.