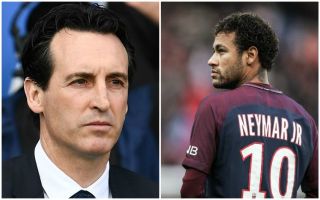 New Arsenal manager Unai Emery has admitted he didn’t feel like he was really the man in charge at his former club Paris Saint-Germain.

The Spanish tactician has just left PSG and was swiftly snapped up by the Gunners, who have replaced the long-serving Arsene Wenger as he stepped down after 22 years.

MORE: Arsenal fans have a new nickname for their club as Gunners edge closer to £66million double transfer

Emery, however, clearly seems to have left PSG with something of a bitter taste in his mouth as he takes aim at Neymar for being the real leader at the Parc des Princes.

The Brazil international joined the French giants from Barcelona last summer in one of the most high-profile transfers in modern history, and it won’t come as too big a surprise to many that he has an influential role at the club due to his fame and big personality.

Emery appears to have confirmed it was not an ideal set-up with Neymar in charge at PSG, with his quotes hinting he’s glad to have left that drama behind to take on his new role at Arsenal.

‘I know when I lead a group and when I don’t,’ the 46-year-old told The Tactical Room.

‘It is a process that every coach must live and internalise, it is something that is learned with time and experience.

‘In each club you need to know what your role is and what role should be assigned to the rest of the group.

‘I am of the opinion that the leader of PSG is Neymar.

‘Neymar came to PSG to be the leader, to go through this process and become the best in the world.

‘In Manchester City it is Pep Guardiola, in PSG it is Neymar.