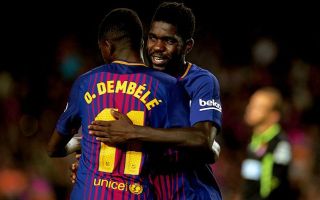 Alongside Gerard Pique, Barcelona defender Samuel Umtiti has played a pivotal role in the club’s success over the last season.

The Catalan giants ended the campaign with the La Liga title and Copa del Rey, with the French international featuring 40 times and helping them to some impressive defensive numbers.

Barcelona conceded just 29 goals in 38 league games, giving them the second best defensive record in the top flight, and that was mirrored in their cup run as they finished with a domestic double to show for their efforts.

Umtiti’s partnership in the heart of the backline with Pique was pivotal to that, but doubts over his future at the Nou Camp have arisen in recent months with the Metro noting Man Utd have been linked with a swoop for the 24-year-old.

However, speaking on his future, he has seemingly dismissed the idea of an exit, albeit with a coy ending to his answer in terms of leaving the door open to him potentially deciding that he wants a new challenge.

“I’m at a club that allowed me to realise my dream of playing there,” he told L’Equipe. “I’m still under contract at the moment. So for me to leave, either they throw me out the door or I decide to leave.”

Particularly considering Yerry Mina struggled to get playing time from coach Ernesto Valverde after his January arrival as he continued to adapt to Spanish football, while veteran stalwart Thomas Vermaelen has a long history of injury problems, the last area Barcelona can afford to lose a key player is in defence.

Their lack of quality and depth could leave them exposed, and so it will be a potential boost to the club if Umtiti’s comments can be interpreted as him having zero desire to leave.