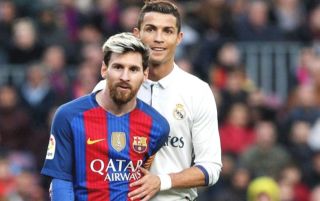 Cristiano Ronaldo has asked for three things that Real Madrid will need to do in order to try and convince keep him to stay at the club, and one of them involves Barcelona great Lionel Messi.

Diario Gol are reporting that the Los Blancos talisman will meet with Florentino Perez in the very near future, and that there has been a lot of speculation about the player’s future with the club in the past few days.

The news outlet are also stating that Ronaldo will ask to be on more money than rival Lionel Messi, for the club to not make any superstar signings such as Neymar, and finally, for the club to sign someone who is a friend of Ronaldo, such as Goncalo Guedes.

Ronaldo is largely accepted as the greatest player in Real Madrid history, so seeing him leave the club on terms like this would be shocking to say the least.

Despite being at Madrid for a fair while now, it would seem extremely strange to see the Portuguese star in a shirt that isn’t the famous white of Los Blancos.

If Real Madrid are desperate to keep Ronaldo at the Santiago Bernabeu, it’ll be interesting to see if they succumb to his demands in order to avoid the risk of losing the player in the near future.