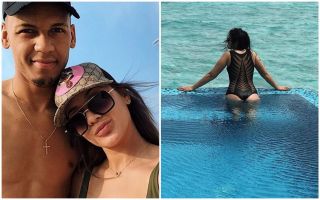 Liverpool have completed the signing of Monaco midfielder Fabinho this evening to mark their first piece of business of this summer’s transfer window.

The Brazil international looks a superb addition to Jurgen Klopp’s defeated Champions League finalists, marking a major upgrade on the likes of Jordan Henderson in the middle of the park.

As well as that, Fabinho WAG Rebeca Tavares should also be a great addition to the Premier League list of glamorous wives and girlfriends, as evidenced by some of the sexy snaps on her Instagram page.

Roberto Firmino, Alex Oxlade-Chamberlain and Loris Karius are also among the Liverpool players to boast some of the hottest WAGs in the English top flight right now, and Fabinho could well be up there too as we introduce his wife Rebeca Tavares.

Take a look at our picture gallery below for the best shots of Fabinho’s WAG that we hope will be in attendance at a fair few games at Anfield next season!

“He is so important to us” – Klopp praises Liverpool star after important tactical tweak Mar 11 2021, 6:43
Liverpool FC