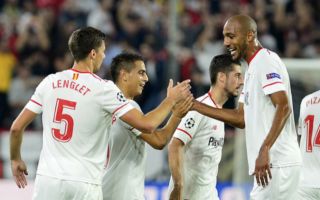 Barcelona are coming off the back of a campaign in which they secured a domestic double, and so it wouldn’t seem as though they need to do a great deal this summer.

Ernesto Valverde will be pleased with his first season in charge, aside from the disappointing exit to Roma in the Champions League which perhaps tainted their year somewhat.

Nevertheless, the Catalan giants ended the La Liga campaign with the second best defensive record and the most prolific attack having scored 99 goals in 38 games to suggest that they’ve found a solid balance in the side.

However, according to Sport, via Cope, they are said to be on the verge of bolstering their defensive options with a €38m move for Sevilla defender Clement Lenglet, to meet his reported release clause, while he is said to be set to sign a five-year deal with the move made official on July 1.

It remains to be seen whether or not there is an official line from either club regarding the touted transfer, but what is certain is that the Frenchman has impressed this past season.

Lenglet, 22, made 48 appearances in all competitions, gaining plenty of experience both domestically and in Europe as he continues to develop after his move from Nancy in 2016 where he won a Ligue 2 title.

With youth on his side and the technical quality paired with a defensive solidity arguably required to succeed at Barcelona, it could potentially be a very sensible signing from Barca.

Particularly given the lack of quality depth behind Gerard Pique and Samuel Umtiti, with January signing Yerry Mina struggling to convince to get more playing time and ageing stalwart Thomas Vermaelen having a stacked injury history, it could be a crucial addition for Barcelona to continue to compete on various fronts.

Ex-star names Barcelona player that ‘everyone is killing’ after horrid treatment from fans Feb 23 2021, 15:37
FC Barcelona