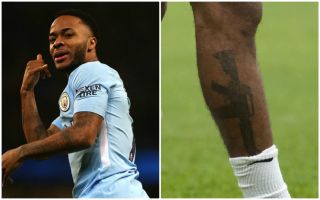 Man City and England winger Raheem Sterling caused a stir after his new tattoo was seen during training over the weekend, and he has come out to defend himself from criticism.

As noted by The Sun, the 23-year-old sparked an angry backlash from sections of the media and supporters after what looked like an assault rifle was spotted on the side of his lower leg.

In turn, as seen in the image below, he has responded on Instagram by explaining what’s behind his decision to get the ink done, as it relates to the passing of his father when he was a youngster.

While it obviously has personal meaning and innocent intention, it hasn’t gone down well and it has attracted unwanted criticism ahead of the World Cup which gets underway in a matter of weeks.

As a result, Gareth Southgate will possibly be unimpressed by the furore it has caused and he’ll be desperately hoping that it doesn’t act as a distraction for Sterling or any of his players.

Sterling had an impressive campaign for Man City this year, scoring 23 goals and providing 17 assists in 46 games in all competitions. England will be hoping for the same level of impact in Russia next month, minus the controversy.

Although he owed the world no explanation, Sterling has also issued this on his Instagram to explain his tattoo. Had The Sun even thought/tried to contact his representative for comment they'd likely have been told the story. We have to call this stuff out, it's poisonous. pic.twitter.com/5RmJ5hSoZs