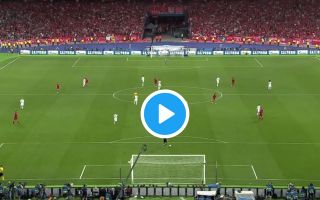 We’ve all seen Gareth Bale’s sensational goal for Real Madrid vs Liverpool in the Champions League final, but this angle takes it to new levels.

Not least because of the Welshman’s incredible finish, but also for the team build-up play that proceeded it, which is shown in all its glory in the video below from the stand behind Loris Karius’s goal.

There’s a reason why Los Blancos have won three consecutive Champions League titles, making it four in the last five years, as they simply dominate on Europe’s biggest stages.

Admittedly, they took their time against Liverpool as they looked vulnerable early on while Mohamed Salah’s injury was a major turning point.

Nevertheless, it’s difficult not to appreciate just how good they are. This passage of play just goes to show how patient, technically sound and brilliant this goal was with Bale providing the perfect ending after a 15-pass team move to push Liverpool from side to side before creating an opening. In fairness though, no one could see that finish coming…

This is a brilliant view of Bale finish ??pic.twitter.com/Yh1EC6P5NY