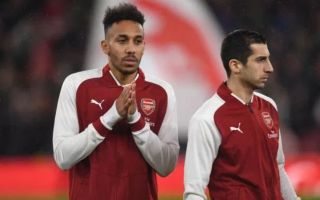 Arsenal striker Pierre-Emerick Aubameyang has dropped a hint on Instagram that the club could be close to sealing the transfer of Sokratis Papastathopoulos.

The Gabon international played alongside the Greek defender at Borussia Dortmund, and it looks as though the pair are set to be reunited at the Emirates Stadium.

This is according to a recent report by BBC Sport that Arsenal were closing in on signing Sokratis for £16million in what looks a necessary addition to help the team tighten up at the back.

Aubameyang seems to have hinted at a deal as well by liking an Instagram post from an Arsenal fan page asking fans who was excited about Aubameyang, Henrikh Mkhitaryan and Sokratis being reunited.

This captioned a photo of the three players together at Dortmund, and Aubameyang seems to be suggesting he’s looking forward to it – either that or it’s just the 28-year-old being a little nostalgic.