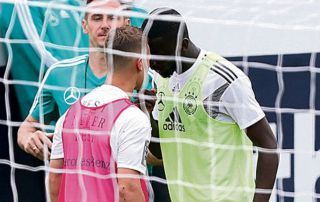 According to Bild, the pair came to blows over a rough challenge, though it’s not entirely clear who was seen as the guilty party in the exchange.

The German outlet reports that coach Klose had to intervene as the two players were pictured squaring up to each other, though things soon calmed down.

This seems like far from ideal preparation for the German national team as they head into this summer’s World Cup looking to defend the trophy they won back in 2014.

Rudiger and Kimmich seem likely to be key players for Joachim Low’s side, having both enjoyed strong seasons for their clubs.

The reigning World champions won’t want to pick up any needless injuries in training or see squad morale harmed by squabbling like this.

Rudiger ended his season with Chelsea on a high after a strong performance in defence against Manchester United as the Blues beat the Red Devils in the FA Cup final.