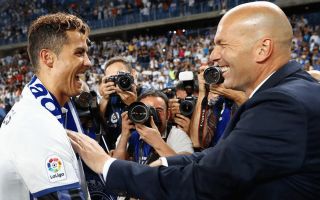 Real Madrid will be looking for a new coach this summer after Zinedine Zidane confirmed that he was stepping down in a press conference on Thursday.

As noted by BBC Sport, the French tactician made his announcement in front of the media alongside Madrid president Florentino Perez, just days after leading Los Blancos to their third consecutive Champions League triumph.

On one hand, considering the amount of success Zidane has enjoyed at the Bernabeu, it will be a disappointment for many to see him stand down arguably a little prematurely when he could have led his side to further trophies next season.

However, he walks away while on top after another European success, and as detailed in his press conference, he evidently feels as though the time is right for a new voice to be heard in the dressing room, as noted by BBC.

Naturally, having enjoyed such memorable moments with the Madrid legend, the current squad will be disappointed to see him leave, with Cristiano Ronaldo and Sergio Ramos taking to Instagram shortly after the announcement was made to share their thoughts.

Both paid tribute to the impact and influence Zidane had, as evidently he enjoyed a strong relationship with his players during their successful run, getting the best out of the senior players in particular by giving them fundamental roles in his plans.

“I’m just proud that I was your player,” Ronaldo wrote, as seen below. “Mister, thank you so very much.”

While Ramos added: “As a player and coach you decided to say goodbye at the top. Thank you for two and a half incredible years. Your legacy will never be erased, one of the most successful chapters in the history of our beloved Real Madrid.”

Time will tell who replaces Zidane, but it’s certainly going to be a hard act to follow…